My husband and I traveled to Switzerland in September. We arrived in Lucerne four days before our tour began, so we had lots of time to explore this very beautiful city! I took the time to capture some scenes with my pens, ink and watercolors! I barely scratched the surface of all the subjects there were to sketch in that fabulous city! 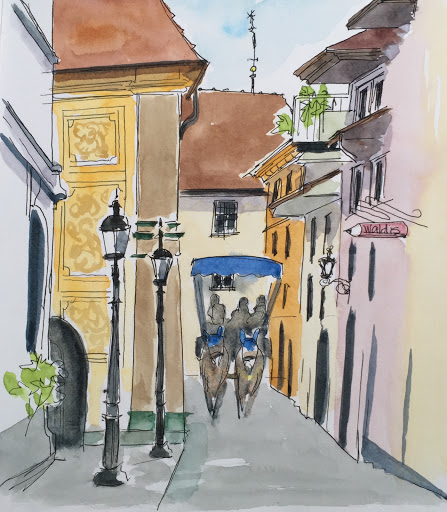 I sat on a bench on the bridge to sketch this scene. The horse and cart came up this street several times, which gave me a chance to fine tune the horses, colors, proportions, and shapes. It’s still just an impression of the scene. 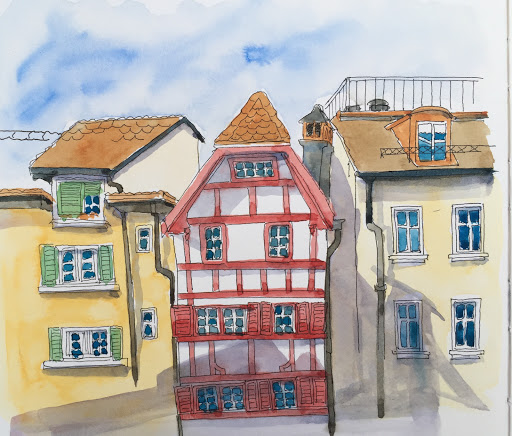 This was the scene from our hotel room. It’s so interesting how each building is a different style and snuggled so close together! We could actally see the river from our window, though not a scene worth sketching.

I took a long time to sketch this scene of the old city of Luzern along the River Ruess.There are actually two bridges in view, the one in front with rod iron railings and the old iconic covered wooden bridge and tower directly behind. 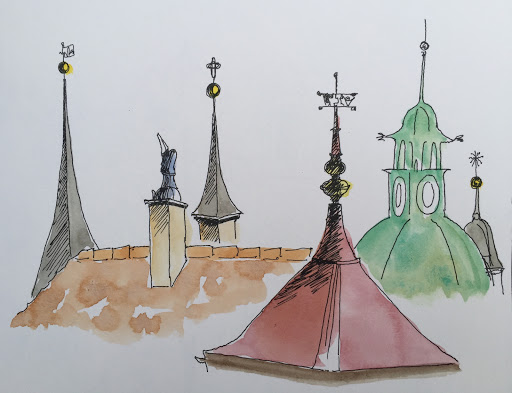 Luzern had the most interesting towers and metal flags or symbols atop the towers than any city I’ve been to. 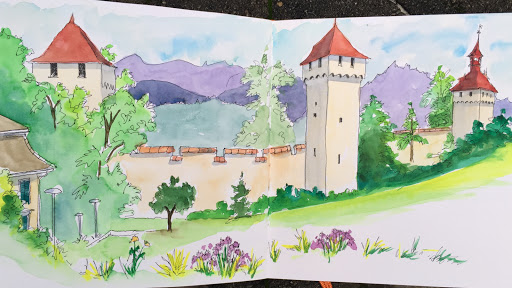 I hiked up a path outside the old city one afternoon, to find this vantage point of what looked like a fortified city wall with three towers. I learned later that the wall was only built by the aristocracy to look like it was used to protect the city though it was not.

Sketching this scene in Bay View, Washington was quite an experience. We met Cory and the family owners of this boat works business, who gave us the very interesting history of this three generation business. Cory took me on a tour of the inside of the original building. This sketch took much longer than expected, and was quite challenging, but most rewarding! 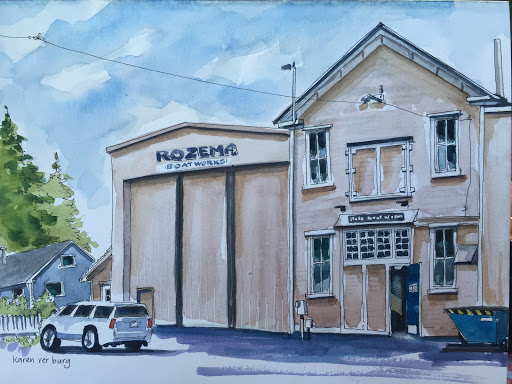 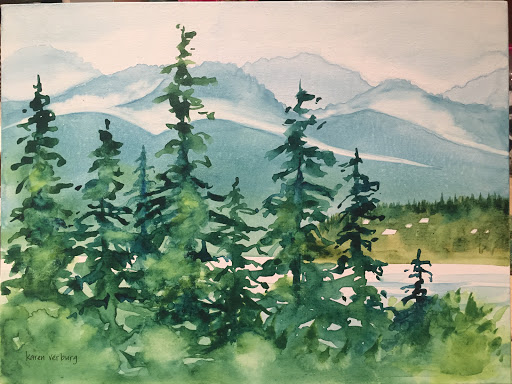 This painting was done withwatercolor on a watercolor canvas panel. I enjoyed the process and the result! I want to try this again! 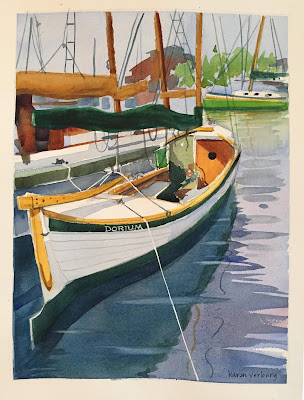 I'm really into painting boats again. I was especially inspired during our visit to the Port Townsend Wooden Boat Festival in September. I took lots of photos there and drew a few sketches. I worked on the painting at my fall painting camp on Samish Island. It seemed daunting when I first began and most of the way through. I almost gave up several times. I powered through and when it was finished, I was satisfied and anxious to start another one. 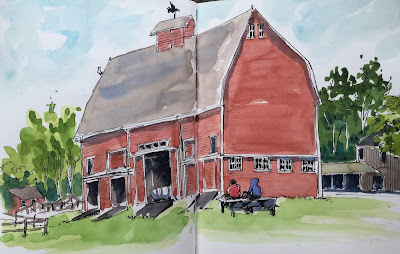 The barn at Hovander Homestead Park is so big and impressive! The house, the barn, the animals and the grounds have held many memories for me and my family over the years. This was the first time that I challenged myself to sketch the entire barn, managing to get it all on a double page spread in my sketchbook. My sketch makes it look like it's on a big hill, when actually the grounds are quite flat. I was with our Bellingham Urban Sketching group that Saturday morning. We enjoyed fleeting moments of sunshine and an occasional raindrop, which created interesting and unexpected ink lines on our sketches. This park is such fun and one of my favorite Whatcom County parks!
Posted by Karen at 9:23 AM 1 comment:

This is the view of the Colophon Café from the Village Green in Fairhaven. This painting was done as a pen and ink sketch and painted with watercolor on watercolor paper. I especially enjoyed trying to achieve the textures of the old stone and the reflections in the windows. This watercolor painting
is 8" x 10".
Posted by Karen at 7:33 AM No comments:


I painted this as a result of being inspired by many walks at the marina and noticing how the bows of the commercial fishing vessels created interesting shapes. I created a watercolor sketch of this idea in my sketchbook a couple of years before actually painting this piece in acrylic on a 24" x 36" canvas.
Posted by Karen at 10:30 PM 1 comment: